You KNOW what state man arrested for botched castration

You KNOW what state man arrested for botched castration

Florida Man to the rest of the planet: hold my f--king beer and watch this!

If so, perhaps you should trust this delicate medical procedure to someone other than a 74-year-old fetishist you met online.

Responding to a Florida residence late Sunday night following a 911 hang-up call, police encountered homeowner Gary Van Ryswyk at the front door. The retiree explained that he “had that evening performed a castration to a male subject within the residence.”

Police then located the patient in the guest bedroom, where the man “was holding a bloody towel to his groin region.” On a table next to the bed was a jar containing the man’s testicles, according to an arrest report.

Re: You KNOW what state man arrested for botched castration

"Florida Man" is now not just an Internet meme, but a play. Personally, as a Floridian, who's seen a lot of the same stuff, I love this guy's play.

Producers at NBCUniversal’s Oxygen network have already announced plans for a TV series based on the mythic “Florida Man.”

You’ve assuredly read of the collective Florida Man and his wackadoodle exploits. He’s often naked, like the Daytona Beach man who was wearing only socks at the airport baggage claim. He’s often carrying an alligator — sometimes even into a convenience store.

And now, with apologies to radio’s Howard Stern, meet the new King of All Media: Florida Man.

He’s the subject of a new play, written by a Florida man, and making its debut July 31 Off-Broadway at New York’s Theatre Row Studios on 42nd Street, the Gainesville Sun first reported.

“Florida Man” was written by Michael Presley Bobbitt, a commercial real estate appraiser by day and a playwright and board member at Gainesville’s Acrosstown Repertory Theatre — which will get its crack at the play in October after it completes its Off-Broadway run.

Bobbitt also “raises goats for no reason at all,” according to his website. He lives in Gainesville with his wife, Laura, and son Liam.

The play’s central character is Billy Crud, a man who loses his father before he can “resolve a laundry list of regrets and hurt feelings between the two men,” according to Bobbitt. The comedy of errors is set against a backdrop of Florida folklore.

“A Florida Man, racked with guilt, digs up his dead father to give him the proper Viking funeral he always wanted. Set in the wild world of the Florida Man headlines that have captured the nation’s attention, this comedic odyssey explores some of the deeper human issues that affect us all — that exploration coming partially in the form of a jelly-donged homemade sex machine.”

“I wrote ‘Florida Man’ because the outrageous headlines that have captured the nation’s attention do not accurately represent us,” Bobbitt said. “They are fun to read, but they paint a cartoonish portrait of our great state, one that revels in the surface-weird without digging down into the truly bizarre guts of this wild place.

“‘Florida Man’ is a deep dive into the heart of a swampland culture where everyone is more than they appear,” he continued. “The Florida Man phenomenon has captured the imagination of the nation. A drive-thru employee being assaulted with a live alligator, a scientist kidnapped to help a Florida Man clone his dog, a house burned down to get rid of vampires, a naked Florida Man breaking into a restaurant to play bongo drums — the Sunshine State has weirdness for everyone.”

I have long been a fan of Dave Barry. He also gets it. The weirdness of this place is part of its charm. Come on, man, where else will you find people who charge at you wielding alligators as weapons?

Dare I say, it's a Florida thing and you just won't get it if you don't live here.

Incidentally, a film I can really recommend is Sunshine State, by John Sayles. The film is amazing. A really nice exploration of everything that was good about the so-called Old Florida before development ruined it without however glossing over many of its flaws, most notably segregation, and segregated beaches. The protagonist is the daughter of a motel owner who used to work as a mermaid at Weekee Wachee. Developers want to buy her and her father's motel.
https://en.wikipedia.org/wiki/Sunshine_State_(film" onclick="window.open(this.href);return false;)

Don't expect a lot of explosions and superheroes. A lot of quiet moments, like riding a canoe through a Florida river. It's just a nice "slice of life" story, but I think the background theme is how unrestrained overdevelopment is really wrecking the state. 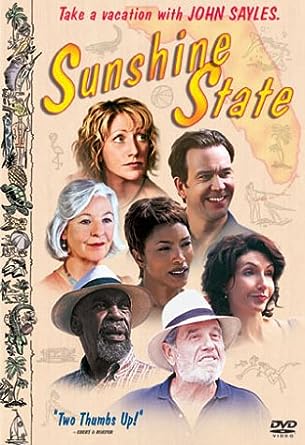 Anyway Weekee Wachee is the real deal, and it's still around, in Ocala. They still do the shows.
https://weekiwachee.com/mermaids/" onclick="window.open(this.href);return false;

You ride a glass bottom boat, and ladies dressed as mermaids will do an underwater show for you down below. And yes, this is fact, they are just holding their breath for really long. There's no masks or equipment.
-- Tis an ill wind that blows no minds.
Malaclypse the Younger
Top
Post Reply
2 posts • Page 1 of 1