So, the two main things I gleaned from that interview, and other stories.

Parnas makes clear: Trump's claim not to know him and Fruman is a lie; yes he knew about everything; yes he was directing everything. Yes, they were working with Ghouliani to track, harass, and do other stuff to Ambassador Voy, go after the Bidens, and get themselves and other buddies on the Naftogaz board.

So many bombshells are detonating, right as the trial is about to begin. There WAS a concerted attempt to track the movements of Ambassador Voy, and this nutter running for Congress in CT ... Hyde ... made a threat to kill her. Then apparently he got committed from, where else, Trump's Doral shithole, because many people do go crazy there.

Robert Hyde tracked her, harassed her, threatened her. Some kind of episode happened at Doral Trump Resort, they had to call the police on him, because he said landscaping agents were trying to kill him.

But that episode does not seem to have stopped him from running to Congress in CT. Because, why not, it's America.

Ukraine is launching an investigation ... not into the Bidens, but into the surveillance and harassment of Ambassador Voy.

Also, BTW, it's been reported that Russian hackers broke into Burisma's servers in Ukraine, apparently/supposedly looking for "dirt" on the Bidens ... recently.
-- Tis an ill wind that blows no minds.
Malaclypse the Younger
Top

Parnas seemed to understand that Hyde is a certified nut case who did a 5150 at one point, and so anything he says has to be verified elsewhere.

The picture that emerges is one of a bunch of misfits, small time gangsters, and drinking buddies thinking they can run a foreign policy on behalf of their godfather.
Top

I don't think Hyde can be relied on, but the recent realization that there was a concerted effort to put Amb. Voy. under surveillance and threat, doesn't rely only on his dubious say-so.
-- Tis an ill wind that blows no minds.
Malaclypse the Younger
Top

I had no problem believing that "she was going to go through some stuff" due to her sudden departure from Ukraine. She essentially fled the country.

I have no evidence whatsoever to back this up. I just think that it would be just like the current excuse for an executive branch.
Top

The House Judiciary Committee released more documents Friday from Lev Parnas, the Rudy Giuliani associate at the center of the Ukraine scandal that prompted President Donald Trump’s impeachment in December.

The documents include communications that appear to further detail efforts to surveil then-U.S. Ambassador to Ukraine Marie Yovanovitch. They also show frequent communication regarding Ukraine between Parnas and Derek Harvey, an aide to Rep. Devin Nunes (R-Calif.), despite Nunes’ claims he didn’t have a role in the scandal.
"The Clouded Mind See's Nothing", The Shadow.
Top

Is Lev Parnas lying? Is he untrustworthy? I have no assessment at this point. I think comparing him to Avenatti is a bit superficial. Avenatti seems to have been a shameless self promoter and using Stormy Daniels for his own benefit. Yes, sleazy lawyers exist, and he was one. I agree people facing charges will say stuff people want to hear to save their ass, but they know they also need to be careful, because if they are caught lying, it can make their situation worse. See: Mike Flynn.

I can say this much; the Trump administration is clearly lying about not knowing Parnas and Fruman. Not only that, but it fits a pattern of Trump suddenly "not knowing" people when he wants to pretend he doesn't, he has done this a lot.
https://www.snopes.com/fact-check/trump ... or-fruman/" onclick="window.open(this.href);return false;

Yes, photos can be photoshopped, no this one is not, it's been forensically investigated. 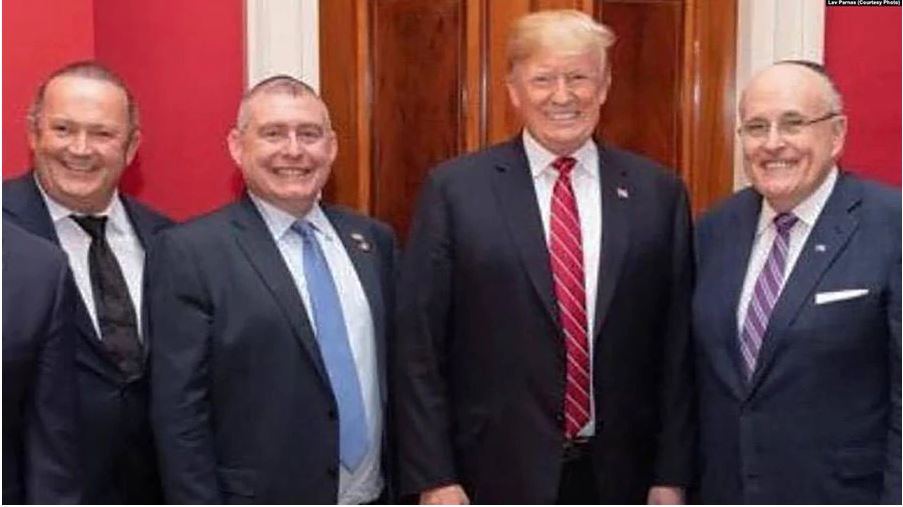 "I take photos with everybody" is a piss poor excuse for claiming he doesn't know these people.

There are such things as facts, and one is that these photos exist.

BTW, there's also basic questions of logic, and it seems illogical to me to think these guys were working so closely with his personal attorney, Rudy, yet Trump knew nothing about them. Also, BTW, as I noted elsewhere, there are email exchanges between Parnas and Trump officials, and those so far appear to be authentic.

Parnas turned over a trove of documents and text messages to House investigators that were released Tuesday night, and he sat for an interview with MSNBC's Rachel Maddow that aired on Wednesday evening.

The documents say that Giuliani was acting with Trump’s “knowledge and consent” to pursue a shadow foreign policy, with a letter signed by Giuliani asking for a meeting with Zelensky and with the approval of Trump.

Unless that letter is a fabrication, it exists, and it says what it says - a matter of fact. These documents could be forgeries, nobody's shown that. Therefore, I don't see why they're not authentic. And also this thing I call "evidence".
-- Tis an ill wind that blows no minds.
Malaclypse the Younger
Top

Only two things matter. Will there be enough GOP votes in the Senate to impeach, or will the recent news coming out make a difference in November with Michigan, Pennsylvania, and Cheesehead voters.

Do I trust either of these right now? Not much.
Top

The materials released by Mr. Parnas are damning in and of themselves, he seems to saved all or most of his communications between himself and Ghouliani.

Unlike 45 who engaged in ongoing Obstruction of Congress. It does not matter if the WH claims to not know/knowing little about Mr. Parnas. The photos attest to the relationship between Parnas, Rudy and 45.

It has become a stock denial by 45 that he does not know someone, even after it proven that he does. After having told over Fifteen Thousand (15,000) lies it is easy to say believing 45 is a fool's errand. 45 attacks the F.B.I., the C.I.A., Gold Star Families and shits on our veterans. Taking the word of Draft Dodging Coward like 45 about NOT!!! knowing Parnas is beyond ridiculous.
"The Clouded Mind See's Nothing", The Shadow.
Top

So, what's your point? Is testimony from Parnas on the Biden investigation or the threats to Yovanovitch going to convince enough Republican Senators to vote in favor of removal? I don't think so.

Is his testimony going to convince any voters who would have otherwise voted for Trump in November to vote for a Democrat? I don't think so.
Top
Post Reply
11 posts • Page 1 of 1