All issues pertaining to upcoming elections are discussed here.

I guess this is sorta a 2022 election, but the primaries for it are already kinda starting.

Mark McCloskey, the St. Louis lawyer known for brandishing a rifle at Black Lives Matter protesters outside his home last year, announced his run for the Senate in Missouri on Tuesday.

"I've always been a Republican, but I've never been a politician," McCloskey told Carlson. "But, you know, God came knocking on my door last summer disguised as an angry mob

McCloskey said he was inspired to run for office as he was rallying for former President Donald Trump.

Greitens, who also declared his candidacy on Fox News, has striven to align himself with supporters of Trump. He has tapped Kimberly Guilfoyle, a former Trump campaign aide who is Donald Trump Jr.'s partner, as a national campaign chair. He is also a frequent guest on a daily podcast hosted by former Trump adviser Steve Bannon.

McCloskey and his wife, Patricia, made national headlines in June when they waved guns at people in their neighborhood who were peacefully protesting police brutality and the city's mayor after the death of George Floyd in Minneapolis police custody.

Their actions made them heroes in some GOP circles and earned them a speaking slot at Trump's Republican National Convention.

They later pleaded not guilty to two felony charges. Gov. Mike Parson, a Republican, has said he would pardon the couple if they are convicted.

Should be an interesting primary. Guess McCloskey and Greitens will try and out-Qcumber each other.
-- Tis an ill wind that blows no minds.
Malaclypse the Younger
Top

Isaac Bryan jumped out to an enormous lead Tuesday in the race for a state Assembly seat in a heavily Democratic Los Angeles district.

Central New Yorkers went to the polls today to vote on their school district’s budget and who will be on the school board.

The results are in and no budgets was defeated.

MONTGOMERY, Ala. (WSFA) - The results are in for Tuesday’s Democratic special primary election in the race for Alabama House District 78. That’s the seat left by Kirk Hatcher in his move to the state Senate.

No candidate received 50% of the vote. Therefore, Democrats Kenyatté Hassell and Donald Williams, the two top vote-getters, will have a runoff on June 22.

Davis defeated Republican David Standard with 68.5 percent of the vote for the District Two unexpired term.

Dozens of races across North Texas, including those for mayor, city council and school board in some cities, will be decided in runoff elections Saturday.

Fort Worth and Arlington will each elect a new mayor, while six Dallas City Council seats are also on the ballot.

JACKSON, Miss. — Low voter turnout was reported at many polling locations across the state for municipal general elections.

The polls were open Tuesday in 191 of the state’s 297 municipalities, including Jackson and other cities in the metro. Tap here for results after the polls close.

Former Virginia Gov. Terry McAuliffe is projected to win the Democratic Party’s nomination in his quest for a second term in office.

Here are the unofficial results of New Jersey primary elections held on Tuesday, June 8, including the four-way Republican contest for Governor and bids for state Senate and Assembly nominations.

The outcome of the primary elections will determine which candidates will represent the two major political parties in the November general election. 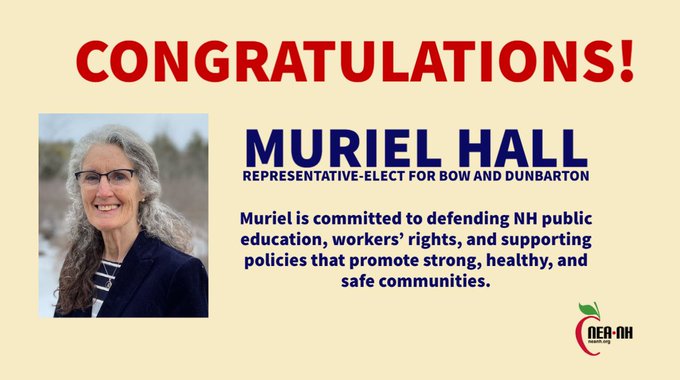 PROVIDENCE — Unofficial results from the Rhode Island Board of Elections show an apparent win for Oscar Vargas in the primary race for Providence City Council's Ward 15 seat.

TODAY IS ELECTION DAY IN THE CITY OF RIVERSIDE

The City of Riverside is holding its final odd year election today. Candidates are vying for a spot on the dais to represent Wards 2, 4 and 6 for a 5-year term as the City moves to even-year elections.

In Ward 6, Councilman Jim Perry faces no challenger in his re-election bid. In 2017, he faced a lone challenger with Rafael Elizalde. Elizalde is now consulting for two Riverside candidates this cycle: Pastor Monrow Mabon who is challenging Chuck Conder for Ward 4, and educator Tony Huerta in Ward 2.

Unofficial results show incumbents Randy Hartmann and Dennis James have been reelected to their seats on the Pierre School Board. They will each serve another three year term.

Todd Johnson was the top vote getter in the Pierre City Commission race, followed by incumbent Jamie Huizenga. They will each serve a three year term.

Pretty big night for Nadarius in the Norfolk area of Virginia.

Nadarius is 26 years old. The video said he knock on 20,000 doors. Nadarius raised $538,353 dollars to Steve’s $463,981. Nadarius has a radio show, He backed things like $15. dollar minimum wage, giving employee unions more power and discussing reparations to the descendants of slaves. He said one of his top priorities is to provide more money for schools with a focus on establishing and supporting vocational training.

Gary Carter Jr. is the projected winner of the 7th District with 60% of the vote, according to the Louisiana Secretary of State's website.

Voters in two Georgia House districts will have to wait another month to learn who will be their new state representatives after candidates in special elections in Cobb County and south Georgia failed to get more than half of the vote.

In Cobb County, Republican Devan Seabaugh and Democrat Priscilla Smith emerged from the five-way special election and will face off again next month. South Georgia candidates Leesa Hagan and Wally Sapp, both Republicans, received more votes than the lone Democratic candidate in that race.

MONTGOMERY, Ala. (WSFA) - The results are in the race to be the Democratic candidate vying for state House District 78.

I have to sadly report Paperboy Love Prince of the Suburbs got only under 1% of the vote.

Paperboy is nonbinary and as such I can only say they were a very interesting candidate.

Paperboy often appears wearing a Gameboy Advance as a necklace.

[from Wiki]
Prince's campaign manager is 13-year old student Theo Demel, who believes that homework is unconstitutional.[1] The campaign's goal is to raise $2 million. Part of the fundraising strategy includes busking outside the Myrtle Avenue station in Bushwick, Brooklyn.[3] The campaign's major policy points include fighting poverty and providing more housing for New York City residents.[14] The campaign hosted weekly free food giveaway events, giving away food donated by churches to whomever happened to show up.[5]

In May 2021, Prince challenged their electoral competitor Andrew Yang in both a basketball game and rap battle at Tompkins Square Park.[15][16][17]

One of the criteria for joining the city's mayoral debates is fundraising a minimal amount of money.[18] Prince was among the candidates who met the criteria to appear on the ballot, but did not meet the criteria to join the debates.[18] While Prince was not inside the building to participate in mayoral debates, they were with the crowd outside, rallying attendees from a bus known as the "Love Tank".[19][20] Prince's performance outside the debate included singing about affordable housing.[21]

A writer for Harvard Political Review said that Prince's campaign could shift discussion about what sorts of political policies are acceptable to discuss and also shift the perception of the electability of minority candidates.[22] A writer for The Red Hook Star-Revue said that Prince was a candidate to take seriously.[23] That paper also endorsed Prince for mayor.[24] Trevor Noah of The Daily Show showcased Prince's idea that police should reward people for doing good as an alternative to spotting violations.[25]

No winner's been declared, this is a complex tallying system of rounds that could take a while, but at the moment the highest tallying candidate was Eric Adams, with roughly 31% of the vote.

Curtis "how do you like my beret" "Guardian Angels" Sliwa won the Republican primary outright already. Incidentally, he was not a Republican until this year, as of last year he was still part of the Reform party, and a NeverTrumper. He has also been a longstanding loon in his own right on conservative talk radio.
-- Tis an ill wind that blows no minds.
Malaclypse the Younger
Top

Mia Bonta, the president of the Alameda Unified School District's Board of Education, opened up an early lead on Tuesday in a special election to succeed her husband Rob in the state Assembly. But early returns from the 18th district, which includes Oakland, San Leandro and Alameda, showed Bonta falling short of the majority vote needed to avoid a runoff later this summer.

Bonta captured 37% of the vote in the last results of the evening released by the Alameda County Registrar of Voters.

The final election results from the Democratic primary are in now that all absentee ballots have been counted. The general election is Nov. 2, in which the Democratic nominees may run uncontested or against Republican or Independent candidates.

Travis Brooks is in the running to replace outgoing chair Leslyn McBean-Clairborne, who decided not to run again after spending 20 years as the legislator. Brooks defeated Nicole LaFave by 34 votes, 396-362. Brooks won the first ward 181 votes to LaFave’s 105, while LaFave was favored in the second ward, 257 votes to Brooks’ 215.

CONCORD, NH — A deluge of morning showers did not keep hundreds voters away from the polls on Tuesday to cast ballots in the Ward 4 Concord City Council special election to finish off the remainder of Meredith Hatfield's term.

Karen McNamara, a long-time resident of Concord and an educator in Manchester, eked out a victory with 135 votes to Connor Spern's 110 votes. Edith Chiasson, another long-time resident and a state employee, placed third with 96 votes.

Timothy Rockwell narrowly beat out Kristen Morris to represent Sun Prairie-area residents on the Dane County Board in a special election Tuesday.

Rockwell earned 52.4% of the vote compared to Morris's 47.5%, making him county board supervisor for the 19th District, according to preliminary results. A total of 1,164 people voted.